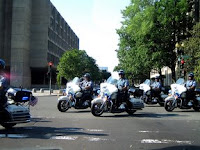 I’m just back from a three-day stint in Washington D.C. to give talks on the RenGen. I have never felt so road weary. It wasn’t the late nights that got to me, it was the early rising. Every morning at 5AM I was jolted awake by what sounded like a three-alarm fire. The culprit was the neighbor down the street, Vice President Dick Cheney. Turns out Mr. Cheney goes to work at the crack of dawn escorted by a full motorcade. Sirens blaring, lights flashing. I asked my host how the neighbors felt about it. She told me the neighbors got up a formal complaint. The Washington Times covered the story. The Vice President’s response to his exhausted and frustrated neighbors was something to the effect that at least they know he goes to work very early on their behalf. What a guy.