The Scene at the Ivy in Beverly Hills 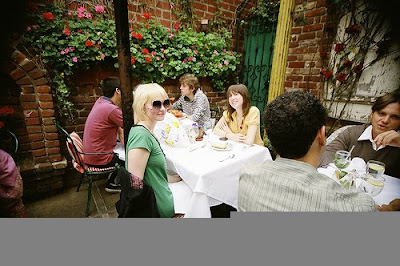 I had lunch at the Ivy in Beverly Hills. I got to see the paparazzi in action. Kathy Bates was having lunch with some friends. They looked fun and low-key compared to Sharon Stone and Melanie Griffith who were being swarmed. The two sat near the picket fence and at one point, a photographer extended his telephoto lense through the picket fence and onto their table. I was appalled. Waiters scolded the aggressor and body guards pressed in on him. It was a scene. All of which seemed perfectly normal as I glanced around the room. Hey, it’s the Ivy, it’s what everyone came for.
In the midst of this scrum, my cell phone rang. It was a reporter from the Houston Chronicle. Okay, now imagine the odds of that? It’s not my son wanting to know if he can ship his clothes home from college. It’s not my daughter asking me if she can forge my signature on a permission slip. Nor is it my office telling me a fax arrived. It’s the media calling me right there at the Ivy.
Turns out it was Shannon Buggs, business writer from the Houston Chronicle. She wanted to write a story in anticipation of my talk in Houston next week. What a great sport she is! She earned my gratitude for holding her deadline until I could extricate myself from the madness of the Ivy and do a proper interview. I walked across the street. A homeless guy let me share his bus bench. I got to watch from afar. There I was. Shannon on the phone, homeless guy on the bench, Melanie and Sharon across the street being mobbed–all in the same swirling moment.
But the real event of the day was the MetLife Forum hosted by the LA Stage Alliance. There was a capacity crowd and an impressive panel of experts. We discussed the increasing clout of the cultural consumer and the future of cultural life in LA. Terence McFarland who heads the Alliance, is using the event as a springboard for future convenings. Thanks for a great event to kick-off the series, Terence!