This Blog is an SOB 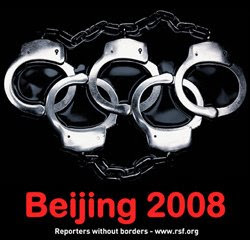 In the love fest that is the Olympics, the Beijing Olympics were supposed to be as Mr. McDreamy. Imagine it–a chance to leap gracefully over the high cultural hurdles of typical marketing, to land softly in front of a billion Chinese consumers.

But years ago, when those deals were being signed, no one could have imagined that “green lite” would become “green panic” and China would become synomous with poison.
And then there are those pesky monks. Robed, humble and fantastically photogenic, they are a public relations nightmare for Olympic organizers.
Enter Jill Savitt and Dream for Darfur. It’s a movement that links China to the genocide in Darfur. I encountered Ms. Savitt when she was fresh out of Yale and leading the media charge for Take Our Daughters To Work Day. I can tell you from personal experience, she’s brilliant, canny and can outsmart any P.R. executive at a major agency for a fraction of their costs. Already she has amassed enough media hits to force a coalition of corporate sponsors to publicy address her demands. Four years ago, sponsors might have sat in smug silence. Savitt is a fierce combatant and she will drive this Darfur sword to its hilt and it will make sponsors squirm.
It gets worse. This brand disaster comes at record prices. Some companies forked out up to $100 million in hotly contested bidding to become official partners for the Beijing Olympics. Those are the just the rights fees. According to Ethical Corporation magazine, “Top sponsors will be collectively spending up to an additional $2 billion on Olympics-related promotions in China alone in what marketers call ‘360-degree brand engagement’ covering television, print, radio, internet, outdoor and mobile phone advertising, and event sponsorships. ”
Sponsoring companies for the Beijing Olympics include Coca-Cola, General Electric, Visa International, McDonald’s, Johnson & Johnson, Adidas, Omega, Volkswagen, Haier, Eastman Kodak, BHP Billiton, Lenovo, Panasonic and Samsung. They will have their hands full shielding their brands from consumer vigilantes.
It’s nearly August in the big scheme of things. All these sponsors can do is ride it out. But what’s now being called into question is whether the world’s instabilities make the Olympics too big a risk at too high a price.
Expect price deflation in coming years. Sure, the Olympics have always been used as a platform for protest. What’s different now is the facilitating medium of Web 2.0 that can mass Tsunami-like force against brands in ways that leave permanent dents in a brand’s aura. Consider also that the some of the issues people are rallying around are long-term global problems. They won’t be solved by Chicago 2016.
Will the Olympics continue to be the darling of corporate sponsors? Probably. What’s not to love? But can the Olympic Program continue its McDreamy status? Not likely.