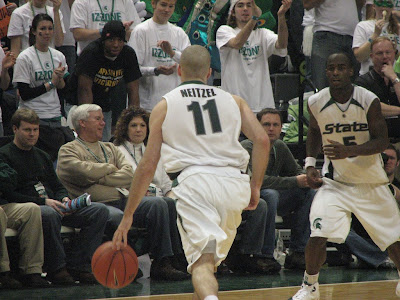 Whether you’re the NCAA or a sponsor, it’s been one of the most expensive Final Four tournaments in history. Tonight it all culminates in the Motor City, my home town, amid one of Detroit’s darkest hours. Still, the Final Four tourney is a triumph in marketing as corporate sponsors signed multiple-year contracts years ago, organizers said.
What’s inside these deals? Have a look:
A multi-million-dollar pledge gives sponsors exclusive promotional rights to 88 NCAA championships in 23 sports in more than 750 venues, said Greg Sheehan, NCAA senior vice president for basketball and business strategies. Sponsors have permission to use the association’s trademark and use the NCAA name to advertise events and contests.
AT&T will host The Big Dance, a music festival on the riverfront this weekend, and Coca-Cola will provide refreshments for Cobo Center’s weekend-long NCAA Hoop City party. Hershey’s hosted an all-star game Friday at Ford Field. Other national sponsors include Enterprise, Lowe’s, The Hartford, Sheraton, VitaminWater and State Farm.
General Motors Corp., an official NCAA sponsor since 1985, cut back this year as it struggles to survive and relies on government aid to stay afloat. The automaker returned its suites at Ford Field to the NCAA and reduced its budget for hospitality, dealer events and additional advertising, according to the Detroit Free Press.
I’ll be on a plane tonight when the Spartans take on the Tar Heels. A friend will give me the “play by play” when I land late tonight at O’Hare. Even from afar, I’m rooting for the Spartans. No question. Not only is Detroit my home town, but Michigan State is my alma mater. Go green!