Nike’s Sponsorship of Armstrong Rolls Out With Chalkbot

Sponsor the World You Want to See 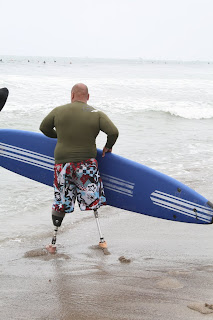 Operation Amped helps wounded veterans of the Iraq War rehabilitate through surfing. Teams of volunteers support amputees onto surf boards and into the waves. Founded in 2006 by surfer/journalist Tom Tapp, Operation Amped is sponsored by the talent agency William Morris Endeavor. As such, it is one of a host of philanthropic organizations across the country that have benefited from the major agencies’ largesse.

As we look out at the world, there’s a seemingly endless pile of problems to fix. Where to begin?
Having just completed a major study on Millenials and emerging media, it’s clear to me that we are moving out of decline and into the renaissance powered by people who want to more purposefully create the world they want to see. Where to begin is by looking around. Finding something to start, get behind, or advocate. Or perhaps it’s finding a sponsor, as Mr. Tapp did, who can share your commitment to a project that makes a difference.
Over the next few weeks, I will devote Sponsorship Mondays to giving hands-on advice for creating the world you want to see and finding sponsors who share your vision.
Photo credit: Donegalgirl, Flickr