Whole Brands: When the Idea Fits the Experience

And the Winnner IS…. 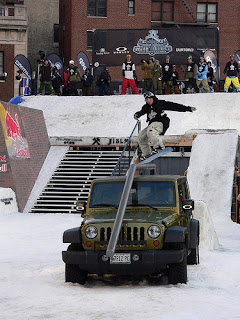 It’s been a weird winter. I was in New York in January and it was 55 degrees. The following week a dozen inches of snow pounded Gotham. By February 7th, it was balmy again for the second annual StreetSessions Snowboarding competition in Union Square Park. With temperatures near 70 degrees 140 tons of snow had to be imported for the event, which featured twenty of the world’s top riders hurling themselves down a ramp for five hours. Jeep and Burton returned as lead sponsors, with Red Bull on-site with vehicles and samples.

Jeep made great use of its vehicles by incorporating them into the competition. “Freedom and adventure are among the core values of the Jeep brand, so we’re excited to sponsor The Union Square Street Sessions, said John Plecha, Jeep Marketing and Global Communications. “Snowboarding is one of the many outdoor activities Jeep owners enjoy.” Prize money was a little less than last year at $15K.
The usual injuries were reported. Split lips, broken collar bones. I once asked my 19 year old son to explain the extreme sport/Fight Club phenomenon. He said he figured in his lifetime, women were going to be in charge, make the decisions and the money. “Most guys aren’t sure where that leaves them,” he said. “So, sometimes it just feels good to get back to the basics.”