On My Nightstand: Marketing to Women, by Marti Barletta

I spent most of last week in Philadelphia. It’s a fascinating city for many reasons. I wrote about it in my last book. It’s got a culture of ingenuity that goes way back to the founding of the nation. To tap into this vibe, companies like Apple are hothousing service innovations in Philadelphia. Why not? It’s the cradle of invention.

Think about it. Benjamin Franklin came well before Brian Tracy or Tim Ferriss. Franklin invented “lifestyle management” books with Poor Richard’s Almanack. “Waste not, want not.” “A penny saved is a penny earned.” 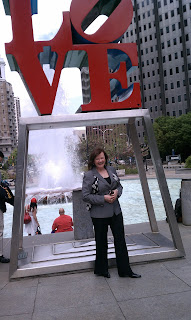 Philly’s also got a population that looks like the future.

As we march into the eye of the dissolution that precedes the coming renaissance, in many ways cities like Philadelphia and Detroit are ahead of the curve. They have faced down their social and economic challenges earlier and are incubating new businesses and mashups in art, technology and urban life to foster unique enterprises. For example, I encountered the very cool Maiden Media, a digital agency that gave a workshop in Apple’s Briefing Room.

Place is going to be important in the next 10 years as we re-tribe and re-build. As Anijo Mathew, professor of design explains, “Now, ‘place’ is more than ‘space’. It’s not just a location, but inextricably linked to people and the things that happen in that location that are meaningful to them.”

At an Arts & Business Council event, I heard Philly native and Tonight Show musician Kevin Eubanks back up that thinking. He gushed about how different Philly was from his days growing up and openly contemplated moving back. Its food, art, and music scenes are all first rate. And it’s all walkable and overseen by the elegant image of founding father William Penn, whose statue is perched atop city hall, reminding citizens of their pioneering roots. It’s a place steeped in the American impulse to make things happen.

What’s not to love about that?