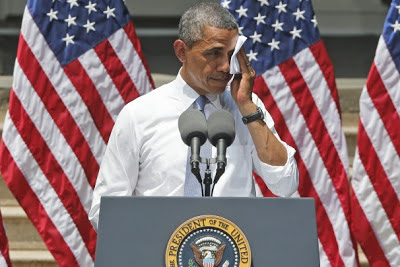 It was steamy hot in Washington last week, too. On June 25, President Obama stood in 90+ degree heat to unveil a plan for reducing greenhouse gas emissions. Called “historic” by League of Conservation Voters’ President Gene Karpinski, the plan would accelerate clean energy leadership.

Wind power, hybrid vehicles, and solar power—we’ve heard about alternative energy for 15+ years. But now, with the increase in community-owned energy and wind energy’s growing market share, it’s looking inevitable. In fact, in our report: 13 Things Breaking Through in 2013, we named renewable energy as a key trend for this year. On the consumer level, adoption of electric cars has surged, with the likes of BMW getting onboard—more evidence that renewable energy is gaining traction.
Is it finally the year for reducing our carbon footprint? Tweet me at @PatriciaMartin and let us know. And download the full report of 13 Things Breaking Through in 2013 for free.