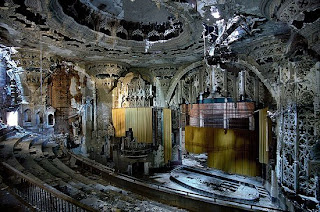 Later this week, I’ll pack up the car and head to Detroit to visit my family. It’s always bittersweet. Because in Detroit, more than anywhere, I am able to see the starkness of the decline. This slideshow tells the story. The photographers who produced it captured it perfectly:

“Detroit was the 4th most important city in the United States.It was the dazzling symbol of the American Dream City with its monumental skyscrapers and fancy neighborhoods.Increasing of segregation and deindustrialization caused violent riots in 1967. The white middle-class exodus from the city accelerated and the suburbs grew. Nowadays, its splendid decaying monuments are, no less than the Pyramids of Egypt, the Coliseum of Rome, or the Acropolis in Athens, remnants of the passing of a great civilization.”
So, in Detroit more than any city I visit, it is possible to witness the death that proceeds re-birth. It’s rule #1 of the RenGen: death comes first. Believe it or not, this is what it looks like right before a renaissance.