Where Are You On Obama’s Map?

Obama Paraphernalia Can’t Get Much Better Than This 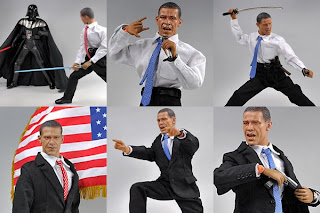 Last time I blogged for Patricia, I documented my story of attending the Obama rally in Chicago. That night, I witnessed an array of Obama paraphernalia from simple t-shirts and banners to custom painted cars. I thought the Obamamania would die down after his striking victory, but I was wrong. Lately I’ve stumbled across some of the strangest items modeled after our 44th President. CNN lists earrings, facemasks, and thimbles. Several sites serve up freshly baked Obama cookies.

Although there are some strange things out there, nothing quite compares to the lifelike Obama action figure that can be yours for a mere $69.99, as long as you can wait the several weeks it might take to ship from Japan. It seems that other countries have also found a way to capitalize on Barack’s celebrity status.

This six inch action figure has it all: Presidential attire including two different ties, several heads to change the facial expression, removable hands to swap with other poses, an American flag, a picnic blanket and food, a stool, and of course, weapons to defeat our greatest foes. That’s right, this action figure comes with a assault rifle to take down terrorists, a sword to battle ninjas, and a light saber to conquer the very real and imposing threat of Darth Vader! I always knew Barack and Luke Skywalker had something in common. Can this action figure use the Force, as well? If you order one, please let me know!