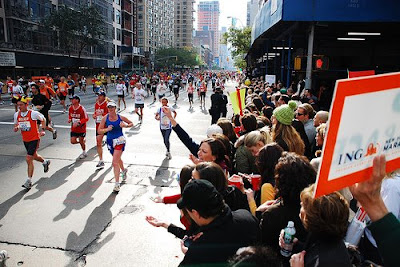 Yesterday was the New York City Marathon, and ING, the Dutch financial-services giant, was everywhere. It purchased the title sponsorship for an estimated $2 million a year a while back, and it was no doubt a relief for race organizers to see ING’s stalwart commitment despite tough times. The New York Times reported that ING was being shored up by the Dutch government with $13.4 billion to prevent a possible collapse.

ING is not planning to cut its commitment to the marathon, which goes through 2010 says Tom Waldron, an executive vice president for ING Americas. He told the NY Times he is sticking with it because it makes good business sense. “We see it as a real sweet spot for us. Our studies show runners are more likely to seek financial advisers.”