Is it RenGen? MySpace To Unveil Content Relevant Ad Service

Ideas are the Power Behind Social Engagement Networks 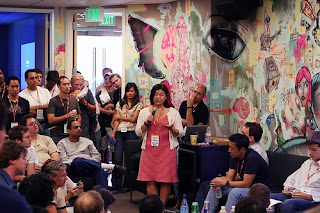 Does success kill? Rupert Murdoch is successful, no one questions that. He’s rich, powerful, buys ink by the barrel. But will that same success kill a social network like MySpace? I know that Murdoch-owned MySpace now has a population that makes it the 12th largest country in the world. Clearly a benchmark of success. But when more consumers aspire to be non-conforming creatives—does Murdoch’s midas touch kill? There are RenGen winners, losers and wanna-be’s. MySpace may be a winner on the way to being a wanna-be…and eventually a loser.

My post about MySpace inspired a couple emails that make me believe Facebook will rule the RenGen. Yes, yes, they may attract the segment of youth with the most influence and disposable income. But class has less sway with the RenGen. What is really engaging about Facebook is that it’s managing its brand like it’s still an idea, not another media outlet. Remember that traditional advertising and marketing drove free-thinkers into their homes and into the arms of TiVo. Social networking offers a different social premise. To reach the RenGen, who are loading their profiles onto Facebook, a brand has to be an idea, it must inspire more and more expression of self. That goes for customers and employees alike. Hat tip to Danah Boyd for FaceBook insights. Photo from FaceBook Garage.