Collective Creativty and the Courage to Think

I Love You, Mr. President…Whoever You Are 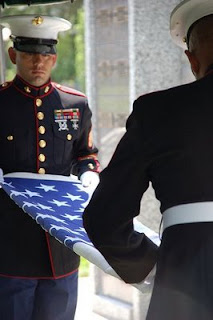 On weekends, I let my hair down and blog about anything that moves me. I wear my heart on my sleeve, voice an opinion, or dare to go places untold. By Monday, it’s back to business.

This week, we said good-bye to my step-father, Joseph Rybicki. He was 88. He had battled Parkinson’s disease for years, until it rendered him mute and incontinent. It was tragic to witness. But he remained dignified right to the end. After all, he was a soldier once and knew how to gut it out.
Joe stormed the beach at Normandy and took a bullet to the chest. He was left for dead and later recovered and hospitalized. Miraculously, he survived his wounds and served out his commission. He would return to his hometown of Detroit and marry a neighborhood girl and start a family. Unfortunately, there was no happily ever after when his wife contracted cancer and died at a young age. Years later, he would meet my mother, herself a widow.
They married and embarked on a life together as two mismatched people working it out for the sake of Catholic duty. No matter, their union provided my siblings and I a sense of stability for which we were very grateful.
None of us anticipated how sad it would be to say farewell to Joe. He wasn’t blood. Still, he was our friend and we loved him. So when the hearse pulled up to the cemetery and the U.S. Army Honor Guard met the coffin, and draped it with the American flag, saluted him and played taps we all cried our hearts out.

And when the ceremony was over, the soldiers folded the flag with careful precision into a tight triangle. A young, fresh-faced female soldier knelt down at my mother’s feet and presented the bundle to her with these words: “I present this flag to you on behalf of the President of the United States, in honor of your husband’s brave and honorable service to his country.” Well, in that moment, that singular moment, I loved George W. Bush. I never thought I would or could ever feel such a sentiment for a man for whom I mostly feel contempt. But on that day, with the sun beaming through the stained glass and resting softly on my elderly mother’s weeping face, and in the presence of this earnest young soldier, I thought well, at least Dubya knows how to send his condolences.

So long, Joe, and “May flights of angels sing thee to thy rest.” (Wm. Shakespeare)