Creative Leadership: Where the Wild Things Are 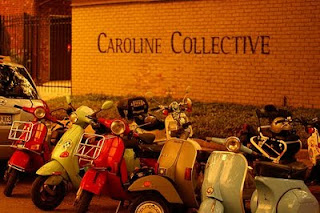 I just returned from a week of field research in Houston and I’m stoked. By any measure, Houston’s a growing, thriving city. But on the surface, it’s not a hip city. I had to scratch the surface. Which was part of my job. I found it teeming with young, fired up entrepreneurs in emerging categories, such as rapid prototyping and eco-landscape art.

Take for instance Dave Morris, who is a programmer by day and a festival organizer by night. He’s cooking up a 3D Festival that launches next month.

Then there’s the Caroline Collective co-working spaces that was featured in Tara Hunt’s fascinating new book, Whuffie Factor. It mashes together people in the arts, technology and sciences to share offices and rub brains. The energy that sparks off Caroline’s is palpable, not just in the hallways of the reconverted prosthesis plant it inhabits, but in and around Houston. It was on the lips of many people I spoke with, even from traditional oil and gas businesses. It’s Houston’s hub for new business boot-strappers pushing the boundaries where art and technology meet.

Caroline Collective’s cofounder Matt Wettergreen is placid and self-assured, a leader with an ability to size up a risk and take the right action. Matt is not creating a co-working space. He’s leading a movement. Modest and soft-spoken as he is, he probably wouldn’t cop to that. It’s part of his charisma. And it’s part of Houston’s recipe for success: lead boldly to open doors for the other guy and good things will happen. It’s a collaborative model. And it’s the future.