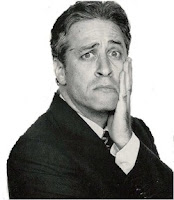 When a stand-up comic becomes America’s most trusted news source, we know we have entered a new era. Jon Stewart is 45 today. Middle-age has brought him greater confidence which gives him chutzpah, silver hair which gives him gravitas, and a seasoned sense of irony that is one of the alleged benefits of maturity. Alas, Stewart has gone a little soft, though. Whether it is the writers strike or what, the Daily Show’s content has followed the regrettable path of major news–it’s become more about Hollywood celebrities than mock hard news. Rumor has it, Stewart’s producer recently took some dissing for rarely booking women authors and experts on the show. So this week, Claire Danes and Halle Berry will be featured. Ms. Berry will discuss the news in Iraq. Ms. Danes will talk about her latest book on the economic implications of the mortgage crisis. Happy Birthday, Jon.