The Politics of Astrology and the Secret Lives of CEOs 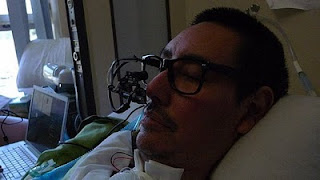 Tony Quan is a Los Angeles-based graffiti artist. His writing, done under the name “Tempt One“, is legendary in LA as well as beyond. In 2003, he was diagnosed with Lou Gehrig’s disease, which left him paralyzed–except for his eyes.

Enter Zach Lieberman of the Graffiti Research Lab. Quan’s story inspired him to create a gadget that allows the user to draw with his eyes. The Eyewriter, as it’s called, is low cost ($50, about as much as an iPod shuffle) and open-source, meaning anyone can access information about the hardware, including the design and the software that drives it. The cost itself is revolutionary–pre-existing “eye-tracking technology” devices cost between $10,000 and $15,000.

When working on the Eyewriter, Lieberman–along with developers from Free Art and Technology, OpenFrameworks and the Ebeling Group–studied Quan’s artwork in order to create the most effective software for him. Besides creating basic shapes and letters, the Eyewriter allows him to add color and shading to the words, extrude them in 3-D and more. But the team’s vision goes beyond Quan–they intend for it to be available to anyone with Lou Gehrig’s (also known as ALS). Their chief goal is helping people who will use the device to communicate, literally and figuratively–whether by graffiti or by basic written words. In fact, their website includes instructions for building a DIY Eyewriter using a hacked PS3 and a cheap pair of sunglasses–again, all for a cost of about $50.

So how does Quan, the man whose opinion matters most, feel about the Eyewriter? “That was the first time I’ve drawn anything since 2003!” he says. “It feels like taking a breath after being held underwater for five minutes.”

Thanks to urban_data for the picture.