Social Media and the Future of Guns

I’ve never cared much for boxing. But my daughter, Grace, took it up with gusto and trained like a maniac. So I became a high-class hostage to the sport. About six weeks ago, her coach had her spar with a woman who is on the U.S. Olympic team. Grace went a full nine rounds with her and came out of it a changed person. She told me, “Mom, no one has ever punched me that hard in my life.” 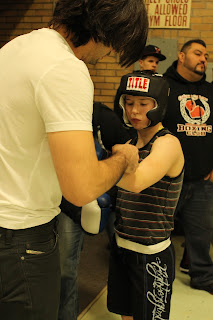 Grace realized there was a gap between where she was and where she wanted to be. That led to two-a-days. She sparred with men. She sparred with drop-ins at her gym. She doubled down on cardio workouts to build endurance. Then she had to drop 10 pounds to get a bout. For a girl who’s 5 ft. of solid muscle at 116 pounds, she had the daunting task of losing weight without losing muscle.

While I was in Austin last week for SXSW, Grace got a wicked flu bug. I returned to Chicago to find her gaunt and exhausted. I was beside myself. I had to nurse her to back to health in time for the Golden Gloves bout when there were, like, five things she could eat!

And then last weekend, in a crowded, sweaty stadium in Cicero (hometown of Al Capone), she did what she had trained to do. Well matched, she entered the ring and took on a feisty Latina. One old guy sitting next to me said it was the best match-up of the night.

At the start of the 2nd round, Grace landed a blow and bloodied her opponent’s nose. The refs wanted to call the fight, but the girl’s coach intervened, signaling that she was a bleeder (meaning it looked worse than it was).

The fight resumed, and her opponent took revenge. She pinned Grace against the ropes and started hammering away at her. Truthfully, I was scared for my kid. But it was the middle of the 3rd and final round, and while Grace was taking a beating, I could see she had more energy in her legs than her opponent did. Suddenly, the girl threw a punch that, had it connected, would have taken Grace out. But in a split second Grace ducked and spun away from the ropes.

Then something amazing happened.

Grace’s coach shouted, “Now!” and Grace drove forward. In a flurry of gloves, Gracie landed blow after blow, marching her opponent across the ring. The crowd went nuts. Above the din her coach cried, “Do not stop!” Then the bell. 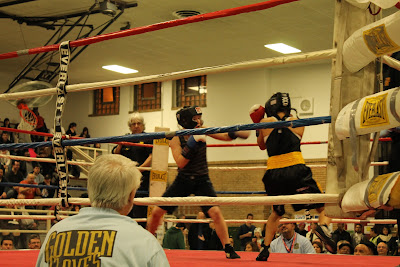 All the retired boxers seated ringside cheered and shook my hand. Never mind that Grace is pint-sized and female. Now, she was a comrade. One elderly black man crossed the floor to greet me. “I competed in the Golden Gloves as a young man, and it’s been a long time since I’ve seen that kind of fight in such a small package!”

I turned to look up at Grace’s college friends seated in the bleachers and realized the entire crowd was on its feet, cheering, as the ref held up Grace’s glove in victory. It was a moment I shall never forget for as long as I live.

This was one of the rare slices of life when it all comes together. When all the effort, ambition, struggle, and grit release in a series of seamless gestures—it’s otherworldly, elegantly arresting.

I had her buddies over for pizza afterwards. They lingered here until I kicked them out at midnight. Then I walked through the house, turning off lights and giving thanks for the wonderful journey that is life.

Let me ask you something. How often have you felt pinned against the ropes? How many times have you felt the sting of a blow to your bottom line? No matter how bruising the economy has been over the last five years, if I learned anything watching Grace fight, it’s this: keep looking for your opening—your NOW moment. Even if you have to pivot and re-position yourself. That’s precisely what breakthrough brands do.

​It’s spring. A new season is upon us. I wish the readers of this blog many NOW moments as the cycle of rebirth carries us forward.