Where Ideas Come From: The Truth About Creativity 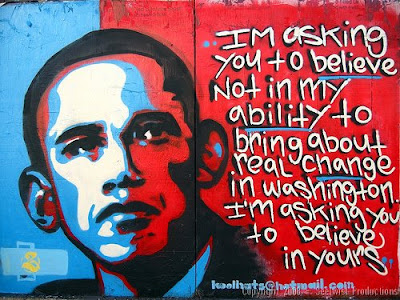 The votes are in. Barack Obama has just been named “Marketer of the Year,” according to Ad Age. He beat out killer brands such as Apple, Nike and even the turn-around story of the year Coors beer. There are five things Obama had going for him to earn such admiration:

1. It’s the future, stupid. Obama bet on the future electorate and appealed first and foremost to a younger audience of voters. These digital natives have learned about tolerance in schools, summer camps and Online in multi-player games where diversity is an asset not a weakness. Their energy was infectious.

2. Forget viral, think forest fire. Some marketers have begun questioning whether the viral metaphor for marketing is past its prime. With voters feeling shut down and dismissed for seven years, it’s a situation more like a dry forest. You can’t be sure what will ignite the forest–a lit match, a spark, a flash of lightening. In our case, it was Barack Obama. It has swelled into a wildfire that will rage until Nov. 2. No amount of ice shipped in from Alaska, or Fox pundits pissing on it, or vintage machismo wisdom about how to fight such a fire will tamp it out.

3. Authenticity all the time. At the core of our organizing myth–the American Dream– is the bootstrapper. Obama is that. But there is a difference between the American bootstrapper and instant soup. It was the injection of Sarah Palin into the campaign that gave Obama’s campaign a powerful point of difference in that regard. People could see what lies at the farthest end of the spectrum of the American Dream. Apparently, they weren’t willing to cash in their heritage of the dream for an add-water-and-stir candidate. Instead, people rallied around the genuine article…the guy who comes from nothing, educated himself and climbed the ladder rung by rung. It didn’t matter that it was a step ladder, it was the acting of pulling himself up it that made it real.

4. Offers a blank canvas. The election fomented the rise of the renaissance generation like nothing else I’ve witnessed. The RenGen is a psychographic that is driven to create, do original work and make their mark. The Obama campaign got this. It encouraged artists to add their creations to the campaign. There were lots of simple ways to get involved. As I traveled the country this fall, I found lots of examples, from student-made Obama artwork decorating the halls of RISD, to originally designed Obama t-shirts created by the baristas of a Mocha Joe’s cafe in Brattleboro VT. Any brand smart enough to offer blank canvas and encourage their customers to fill it with their own ideas understands how to build a RenGen brand.

5. Crushes the competition. Obama is like the first Toyotas sold to Americans after years of owning crappy cars from Detroit back in the 1970s. Obama owes some of his success to the fact that the competition, in this case the Republican party, was such a dismal failure in every regard. Many Americans view the Bush administration as the most bloated, expensive, stalled out, flat, out of gas, car wreck of an operation imaginable.

Congratulations to the Obama Campaign and thanks for teaching us so much.