Why Deadlines are Helpful

English Beyond the Palin 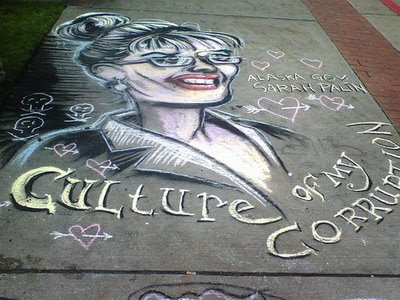 It was perhaps an ethnic thing that made my mother insist we speak, “The King’s English” in our home. She’s Irish, and has all sorts of rigid notions about class and being classy.

Listening to Sarah Palin recently, I felt myself cringing with every “You betcha and we’re gonna.” It’s a reflex I’ve developed after years of being set straight. I suppose after the last seven years it doesn’t seem to bother most Americans. We live in a casual culture. But it has been duly noted overseas, most stridently by the Irish Times. Perhaps it’s an ethnic thing.

This chalk drawing/photo courtesy of the Tacoma Urbanist.