Why I Can’t Live Without Libraries

Can’t Get No Happiness? Try Satisfaction 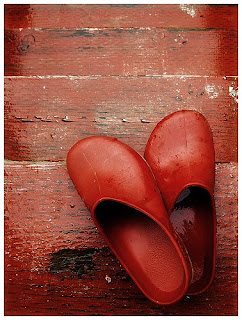 My nose is sunburned. My cheeks are flushed with the heat of a day spent gardening. Today, I hauled and spread ten yards of mulch. Count ’em, ten!

Each time I hauled away another load of mulch, I considered how much I was enjoying it. Not the work, I’m not that crazy. But the smells and sensations. Plunging my shovel into the heap of muddy mulch and feeling it give against my effort felt like I was accomplishing something.

My neck stings a little, probably sunburned, too. But I can’t see. Despite what my kids believe, I don’t have eyes in the back of my head. As I gazed at my yard, I felt a sense of satisfaction. It gave me pause. Lately, I have been gleaning more and more evidence that values are changing surrounding what makes us happy. Note the popularity of Barry Schwartz’s work on the paradox of choice and how it sabotages our happiness. Even the outspoken blogger Penelope Trunk rues misspending her income as a young professional on clothes. The Not So Big Life seems to be replacing the BHAGs.

When one of my Culture Scouts, Brandy Agerbeck said she had learned “that buying things is not the same as doing things,” it rang true. This week, the NY Times reported more bad news on consumer spending. As the market cools, our appetite for the shiny big life seems to be chilling with it.

For a while “happiness” was all the buzz. But I’m not hearing people talk about happiness quite so much these days. Instead, I’m hearing about satisfaction. People are coming to know what gives them satisfaction. I count myself among them. We’re talking about a clearer sense of purpose in life and work that inspires contentment in everyday triumphs. In a society driven to prowl for the next big thing, the idea of satisfaction seems puny, doesn’t it? Yet we all know that when we remain persistent, disciplined and habitual in changing a habit or moving toward a goal, we get results. So there is a hard-headed case to be made for plain old satisfaction based on modest incremental successes.

I took a shower, but the grit remains beneath my fingernails forming dark, smiling crescents. I smile back–I’ll have to clean them more rigorously before Monday’s business meeting. But I look out at my garden and it is ready for spring. I feel satisfied.