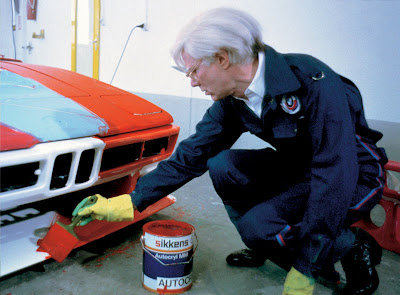 A few years ago, I found myself in the market for a new car. My beloved Volvo wagon was getting expensive to repair with 190,000 miles on its odometer. I test drove a BMW 300 series. It was responsive, smooth, thrilling. It delivered the same sensory overload as a dangerous lover. I couldn’t take it. I passed it by for something more sedate. But I’ve secretly craved it ever since.

This week, BMW unveils its sponsorship of a public art exhibition at Grand Central Terminal in New York. This is not your everyday hanging canvasses show. The art works are actual BMW cars that have been painted upon by the likes of Andy Warhol, Frank Stella, Roy Lichtenstein and Robert Rauschenberg. According to BMW, the “BMW Art Car” program was begun by French racecar driver Herve Poulain. The most recent contributors are David Hockney, Jenny Holzer, and Olafur Eliasson. The artists are chosen by a panel of international judges, per the company. Aiming directly at cultural consumers, BMW will use the campaign to speed the launch of its new 7-Series–which launched this month–and of the Z4, which launches in May.
(photo of Andy Warhol painting a 1979 BMW courtesy of fotonomous)