We admire Jonathan Harris. He caught our attention when he explored online dating behaviors using pioneering data visualization for the game-changing MOMA exhibit, We Feel Fine. A few years later, he launched Cowbird, an ahead-of-its-time storytelling platform. Today, Cowbird has mushroomed into a community of RenGen worldwide.

Jonathan Harris is precog. His visual stories have an otherworldly quality that bends technologies to a more human purpose. But mainly, Harris’s work makes me think we are entering an age where computing power and our own intelligence are converging. The last two years have seen mind-bending uses of social technology and big data.

Change is torrid. The distinction between human intelligence and artificial intelligence is beginning to blur. 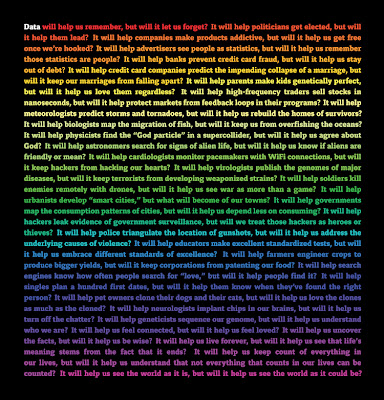 Sounds a little crazy, I know. But based on some of our recent client projects, I’m seeing that social technologies have evaporated the distance between vision and reality. If we can imagine it, we can make it happen. Can we tell that story in a 6-second Vine video? Or post a concept thread on tumblr and see what images collect around it? Voila! an abstract idea has shape and substance.

It’s really, then, just a matter of having the best raw material—creative imagination and conscience intent. Harris’s work reveals what that looks like. His Big Data image asks us hard questions. Namely, does big data help people live better lives? Does it advance the human endeavor? Does it build up the kind of digital culture that inspires us to higher aims?

Harris’s work feeds a deeper need for meaning. Maybe that’s why he is moving the cultural needle. His work is vivid example of how the human imagination can be liberated, rather than abducted, by new media.