A Front Row Seat in History 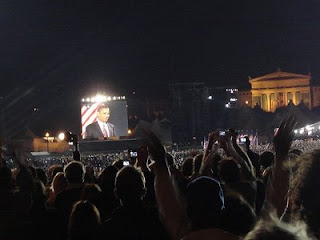 Yesterday, our staffer Katie Darr announced she had landed tickets for the Obama event in Grant Park. We were all thrilled for her, and a little jealous. I asked her to blog about the experience:

Last night, I was among the hundreds of thousands of people who gathered together in Chicago’s Grant Park to participate in one of the most historic events in our nation’s history.

Earlier in the day, I found out I was one of the lucky few (65,000 or so) to receive a ticket for the Obama Rally, I was ecstatic. The gates technically opened at 8:30pm, but by the time my spouse and I arrived at 7:30 the line was over a mile long. The crowd was a mix of old and young, indie and traditional, black and white. It was beautiful. A sense of connection lingered between us as we cheered for every state Obama conquered (even if we found out via text message). Cars with “OBAMA 08” permanently etched cruised by honking, eliciting roars from the never ending line of ticket holders. Chants broke out, American flags littered the scene, and every three feet a vendor displayed a vast array of Obama paraphernalia.

A little after 10:00PM (2.5 hours after beginning our wait) deafening cheers broke out around us. People started yelling that Obama had secured the celebrated 270 votes needed to win. Suddenly the line dissolved, and thousands of us were running toward Grant Park. It kind of felt like plowing through the beginning of the Chicago marathon. People were pushing, shouting, celebrating, and security guards were herding us along like cattle as we scrambled through the checkpoints.

Finally, we made it to Grant Park. Although I could barely see the jumbotron, I knew Barack would be in the same general vicinity as me and that was enough. When he finally took the stage, the sea of people erupted in joyous celebration. “Yes we did!” echoed throughout the masses.

Overall, I’m just thankful for the chance to stand in the midst of a crowd packed shoulder to shoulder and be part of the experience. History was made last night. History will be made in the coming months and years. I’m proud to be a part of this pivotal moment in American history. We have a lot to do as a nation and we have a long way to go. For the first time in a long time, I’m hopeful.