Why Some People Succeed Where Others Fail 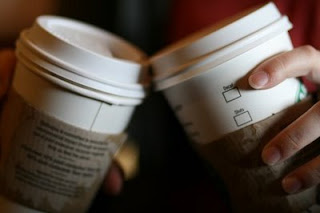 Reading Tom Peters’s blog this morning put me in mind of Starbucks. Peters talks about companies that put a premium on learning and treat customers like people. Sounds like Starbucks.

A few years ago, I visited Starbucks HQ in Seattle as part of my research for my book. I was struck by the energy of its people and the compassion they exuded for their baristas and their customers. The sentiments expressed by management felt real, not programmed. I remember thinking that this is a company that sees people as whole human beings.
Starbucks has fallen on tough times. Haven’t we all? But unlike many leaders in business, Howard Schultz has accomplished a rare feat that will sustain his brand over the these tough, transitional times.
People will root for Starbucks.
Steve Jobs achieved something similar with Apple. But Apple sells larger ticket items. The bigger the ticket, the deeper the purchase consideration, the more you can tap into identity and loyalty. Mass market products have a harder time with this. That is what is so remarkable about Starbucks’ achievement.
Starbucks identified early with the cultural consumer. Okay, so they mis-stepped by trying to sell them CDs. No biggie. Why? Because Starbucks built a brand that is a friend, not a father. We forgive our friends their mistakes, especially when they confess them as openly as Schultz has done. And because Starbucks believed very early that the average Joe in America is not below average, and therefore deserves a premium cup of Joe served with heart, it won us over. Starbucks built a brand based on respect for the consumer as a human being–not a target. And they reflected this persistently in their service, products and policies.
I’ll drink to that!
Photo courtesy of Umsizzle